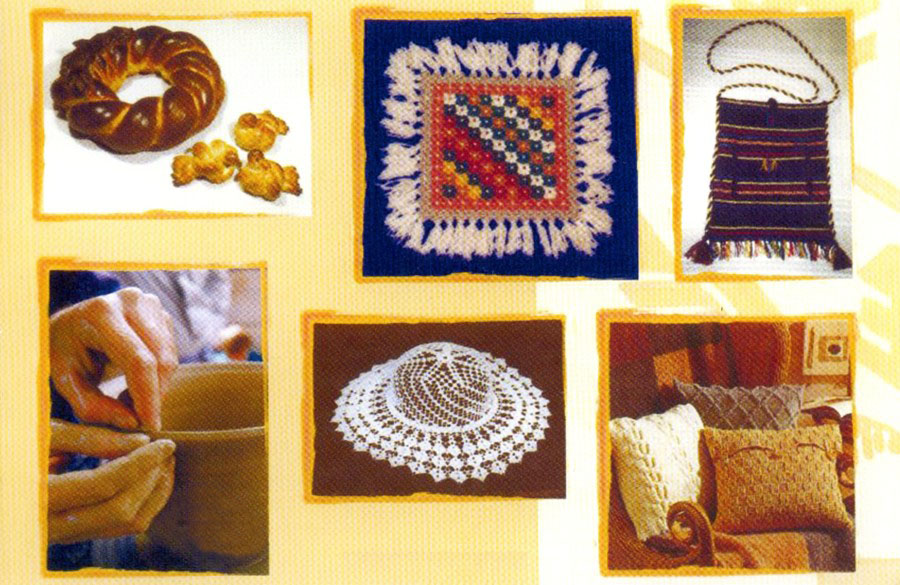 The identity of every nation is its creativity, reflected in the material and spiritual culture. Folk crafts hold a specific place in the culture of the Moldavians.

From ancient times, the rural population of Moldova, along with agriculture and pastoralism pursued additional crafts. It was a domestic production with the use of local raw materials and labor of the members of the community, household tools, in order to fill the aesthetic and functional needs of the family.

The Moldavians produced tools, vehicles, technical equipment used for handling grain and textile plants, manufacturing and cultivating of home textiles, as well as for clothing, household items, furniture, ceremonial attributes (for weddings, funerals, and calendar holidays, etc.). The variety of all these products demonstrates us the talent and diligence of our people.

Various crafts have been developing in order to meet the economic needs of the villagers. Craftsmen made their products on a buy-order basis and also for sale on the market. According to the census made in made in the years of 1774-1777, there were about 157 occupations and crafts in Moldova. In the ХХ century this number increased. The craftsmen such as millers, manufacturers of the beverages, bakery products, and sweets that provide farmers with all the necessary food were closely related to the life in with the villages.

The development of animal breeding resulted in the nascence of artisans that were engaged in processing and manufacturing of the products in the agricultural sector. They were manufacturers, who produced the sausages and other meat products, tanners and cheese makers. In the mid 30-ies of the XIX-th century Bessarabia was famous in Europe and Russia, being the best exporter of wines, pastrami (beef delicacy), dried prunes, sheep cheese, and walnuts.

In the second half of the XIX-th century, craftsmen started to produce on a by-order basis and for sales on the market, the process of the division of labor also came into existence at that time. There were group of chefs, that engaged in cooking of holiday meals for weddings and other celebrations.

The craftswomen, who dyed wool, carpets, towels, belts, cloth, set of warp for woven products ("nividitul"), represented the home textile industry. Some of the crafts started to develop rapidly, involving an increasing number of workers. In 1894, there were nine centers for the production of ceramics in the Orhei county (in the villages of Cinişeuţi, Iurceni, Văşcăuţi, Mîndra, Frumoasa, Hodjineşti, Păuleşti ). In the village of Cinişeuţi 184 families were involved in pottery (about 600 people). There were 237 furnaces for ceramics in the Orhei region.

Potters, just like the craftsmen for production of looms, had been selling their products throughout the territory of Moldova, exchanging dishes for agricultural products frequently.

Because of the development of urban industry, new materials, tools, textiles, dyes, household items, food products appeared in the Moldavian villages. All these materials conduced to the transformation and loss of many forms of traditional activities. They were replaced with new industrial ones. Subsequently in many villages the processes of manufacturing carpets, dresses, baking homemade bread, rolls, dried fruit, cooking homemade sausages and other products had slowed down. In some places these crafts totally disappeared. The production of pottery, wickerwork, fern, and straw also declined.

The standard factory goods (furniture, fabrics, carpets, etc.) are used for the decoration of the houses.

Nowadays, when the society tends to use ecologically friendly household items, it is possible that the crafts can become new economic sectors based on local raw materials (products of agriculture, natural resources) and labor. The development of handicrafts can be combined with tourism. The development of the production of art and crafted products of traditional arts related to the preparation of food seems to be very promising.

The surge in interest to the folk art is caused not only by the attitude towards aesthetic and ethical values, but also by the desire of people to relive spiritually the memories of their ancestors and create good conditions for the development of next generations. The future of our nation, of the national culture depends on our ability to revive the ethnic and cultural values.